A Sad Day for the Twins

Going to opening day at the dome this year is going to be a very different experience now for me and all other Twin fans and players. The only field announcer the Twins have ever had dies at age 79 on Easter sunday. Damn. Lots of memories can be derived just from the sound of Bob Casey's voice. We'll all miss him.
More than 3000 games and 44 years Casey worked for the Twins, and rumor has it he only missed 2 or 3 games in all 44 years; and one of those was for his daughter's wedding.
Definitely an end of an era at Metrodome, and there will be an odd aura for months to come as we will no longer be reminded during pre-game that there is "noooooooooooooooo smoking in the Metrodome!" And when players step up to bat, and we hear someone else's voice over the intercom, we'll look up and say, "that just doesn't sound right."
Posted by drewbacca at 9:22 PM 1 comment: Links to this post

I have finally got my very own web site! Not a blog, but a website. I am no longer constrained to the evils of the blog template.

www.MOVIEPATRON.com
FOR ALL MY FURTURE & PAST MOVIE REVIEWS, GO THERE NOW!!
Tons of stuff to look at now.
Video games
movies
music
Top Ten Lists
My Top 100 Movies of all Time!
www.MOVIEPATRON.com
Way cooler than this site. Please check it at least once, and let me know what you think. I need feedback. Meanwhile, this blog will stay up with the occasional pop-culture rant on something or other. But now, bookmark my new review site:
www.MOVIEPATRON.com
relevant links:
www.MOVIEPATRON.com
Posted by drewbacca at 10:18 PM No comments: Links to this post

What to Expect from 3*

The Phantom Menace and Attack of the Clones were unusual films – they both did phenomenal business at theatres around the world, and yet the quality of George Lucas's new trilogy is constantly called into question on countless Star Wars- and movie-related websites. Perhaps there was no way that Lucas could fulfill everyone's sky-high expectations with the new films, and there is arguably much that could have been improved, as far as acting and writing go. Regardless of whether they will ever be considered masterpieces, both The Phantom Menace and Attack of the Clones gave long-time Star Wars fans the thrilling feeling that we were watching Star Wars for the first time again, and that feeling alone might have been worth the price of admission.

There's certainly no disputing that a heck of a lot of people still care – really care – about Star Wars. As the resident Star Wars geek among my friends, I'm often asked what the third movie will be about. I'm sure many readers are in a similar boat. This piece is a bit of a guide to what Revenge of the Sith will bring, and it might just be the prequel movie everyone's been waiting for. A spoiler-free summary is below.

Galactic war, clone armies, political intrigue, lightsaber duels, speeder chases, Sith lords, Wookiees (including our favorite wookie, Chewbacca!), star destroyers, and Darth Vader – Episode III will have it all. The film starts at the climax of the Clone Wars, a series of campaigns covered in some detail by the animated TV series of the same name (which I highly recommend to all serious Star Wars fans).

The film opens with several powerful political factions allied against the Republic; the Confederacy of Independent Systems, who had their first military confrontation with the Republic's clone army on Geonosis in Episode II, has united several thousand worlds under the leadership of Count Dooku (Christopher Lee), with additional support coming from commercial interests like the Trade Federation, the Techno Union, and the Intergalactic Banking Clan.

The war is now on the doorstep of the Republic's capital, with Dooku and his forces targeting none other than Chancellor Palpatine (Ian McDiarmid) himself. The Republic has responded with a massive military build-up; and the Jedi, who have traditionally defended the Republic, are stretched thin. Leading some of the toughest Separatist forces is a mysterious character named General Grievous (voiced by Matthew Wood), part alien and part robot.

The war affects many other worlds, of course, including the peaceful planet Kashyyyk. The technologically disadvantaged Wookiees demonstrate their valor in resisting a droid invasion. Among those Wookiees is Chewbacca (Peter Mayhew), a familiar character to any Star Wars enthusiast and the newest original character to appear in the prequels.

Meanwhile, Anakin's (Hayden Christensen) frustration with the Jedi Council continues to grow. Palpatine, whom Anakin has been assigned to protect, shows great admiration for the young Jedi's skills. When Anakin discovers Palpatine's own extensive knowledge of the Force and his willingness to share his secrets, the apprentice finds his loyalties shifting.

Of course, it's no secret to the audience that Palpatine is going to betray the Republic; when his subterfuge is discovered, Anakin must choose between the Jedi, whose ways are rigid and disciplined, and Palpatine, who offers seductive powers the Jedi cannot teach. Anakin's decision leads him down the Dark Path of hatred and fear. He will confront his mentor Obi-Wan (Ewan McGregor) and become Darth Vader.

Obviously, there's a lot more than that going on in a two-and-a-half hour movie. Some of it has been revealed in pieces, but much is a mystery. If you don't care about spoilers, you can read more of this article here.

TheForce.net - your daily dose of SW
StarWars.com - official site
countingdown.com - how many minutes til opening day of ep. III?

Awards ceremony, but there is nothing I could write that the entertainment media hasn't already saturated us with. But here's a few tid bits anyway:

Chris Rock was good....not great, but good. Billy Crystal rocked, but he was beginning to wear thin.

Sean Penn needs to lighten up.

My opinion poll question was wrong. How the hell can a question be wrong!?

I'm glad however that Aviator did not win best picture.

Jaimie Foxx gave the best acceptance speech (about how great it was to be beaten as a child).

I got 9 right on my ballot this year, but I got all the actors and actress winners correct.

While Scorsese (0-5 no in the awards) was biting his lip to keep from crying about the little gold figure he did not receive, 150 innocent people were being blown up in Iraq. Something to think about.

It's fun to get together with people, but the Oscars are a joke. There's no assurance that the voters even watched all of the films. And when they do, they are usually on studio given DVD's; not at the theater, which can make a difference. It is also all political and money driven. Three words: Shakespeare in Love.

Nominees for the "unimportant" categories are now all on stage before the winner is announced.

Some winners for the "really unimportant" categories are now forced to give their acceptance speeches from their seats in the back of the theater.


Here's a collage of pics for fun: 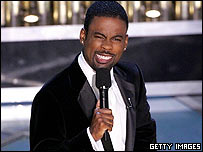 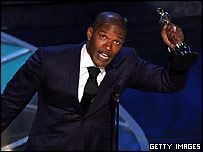 "You poop into my butt hole and I poop into your butt hole... back and forth... forever."